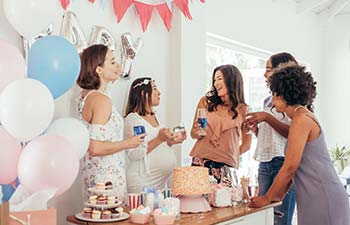 The old saying, “You’re eating for two,” during pregnancy often gives women the personal permission to eat what they want and not stress over it. While it is not advisable to eat your way through pregnancy, especially if you hope to regain your pre-pregnancy figure after giving birth, eating extra calories is necessary for a healthy, growing baby. However, what you eat is important because there are certain foods and beverages that should be avoided at all costs throughout pregnancy – and afterwards if you plan on nursing.

Most foods and beverages are considered to be “safe” to consume during pregnancy – with some being better for you than others.

Foods that you should not eat while pregnant include:

Raw meat
Undercooked meat should be avoided because of the risk of contamination with coliform bacteria, toxoplasmosis, and salmonella.
Deli meat
While this is sometimes controversial, it is better to be safe than sorry. Deli meats have been known to be contaminated with listeria. Listeria has the ability to cross the placenta and cause miscarriage, or cause poisoning to the baby.
Fish with mercury
Shark, swordfish, king mackerel, tuna, and tilefish should all be avoided. Mercury consumed during pregnancy has been directly linked to developmental delays and brain damage in growing babies.
Smoked meat
Refrigerated, smoked meat or jerky should be avoided because it could be contaminated with listeria. If the meat is going to be cooked in a casserole or thoroughly cooked in a soup, then it should be fine to consume.
Raw shellfish
Ray oysters, clams, and mussels should be avoided because undercooked meat is associated with algae-related infections.
Raw eggs
Raw eggs themselves or as ingredients in cookie dough, cake batter, Caesar dressings, mayonnaise, homemade ice cream, and hollandaise sauces need to be avoided to reduce the exposure to salmonella.
Soft cheeses
Imported soft cheeses may contain listeria and should be avoided.
Unpasteurized milk
Unpasteurized milk may contain listeria. Any milk that you consume must be pasteurized.